I have just changed the ordering process......the online form has not really been good for me - I find that I miss more orders than I get and it's just not worth it. So, if you would like to order, you have two options - Email me with the list of what you want or email me and ask for an order form. If we ever build a proper web site, I'll have another go at an online ordering system. You can click on the Pricelist tab to see what sort of cuts are available and the prices.

ALSO....I will be in Yeppoon/Rockhampton on the 6/7th of February. I have decided that after my sell out over last weekend, that I would do two markets in February, so I'll be there in less than 3 weeks. Please order ASAP if you intend ordering.

Last weekend I was in Rockhampton for the markets and I stayed with my sister Rita. It's always a great chance to catch-up and as usual, we spent most of our free time talking about food, or eating food. This is a common thing with all my family when we get together as we are all foodies. Rita and I are on the same wave length with our food philosophy and we really enjoy cooking together - well I enjoy cooking with her because she's one of those people that clean as they go...and I am not!

My first night in town (Friday night) I walked through the front door into a cloud of deliciousness - spicy Mexican flavours.....yum.....Burrito's for dinner! Rita is a fan of the Skinny Mixers and so the mince was cooked in the thermomix and she was still rolling out the burritos, previously mixed in the thermomix. These burrito's were different to the ones I usually make as Rita reckons that they freeze and defrost better. I will have to compare and maybe that will be another post. Either way, home made burritos are so much nicer than store bought (obviously....)

Saturday night we cooked pork shanks. These are so under-rated! I always have heaps left so I thought I'd show Rita how nice they can be. We used a recipe from the Skinny Mixers, A Little Taste of Asia "Sticky Szechauan Pork Belly". Only we used pork shanks and didn't do it in the thermomix. I won't give you the actual recipe, because it's well worth buying the e-book yourself (if you do have it, just do the ingredients for the stock). It was basically soy sauce, sugar, ACV, ginger, garlic, onion, star anise, cinnamon stick, szechuan peppercorns, cloves, cummin seeds, fennel seeds, coriander root and stems, and water. 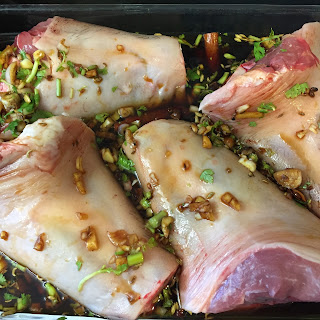 Poor over the shanks, cover and place in a moderate oven for about an hour. Turn them around a bit and cook for another 1/2 hour covered. Then remove the cover, crank up the heat and cook for another 1/2 hour (2 hours in total should do it!) - this time, try and stand the shanks up so most of the rind is out of the sauce so that it can kind of crackle up. Drain off the sauce and place in a saucepan to thicken with a little corn or arrowroot flour. 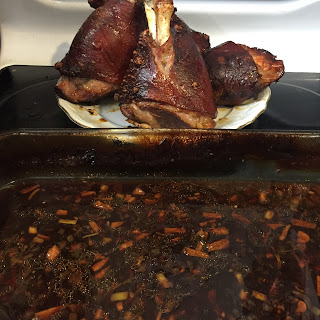 Cut the meat off the bones for serving. We served ours with rice cooked in the thermomix and some fresh out of the garden vegetables that were steamed in the varoma while the rice cooked. One of our bigger shanks is enough for two people. Leftovers are always good if you do more. 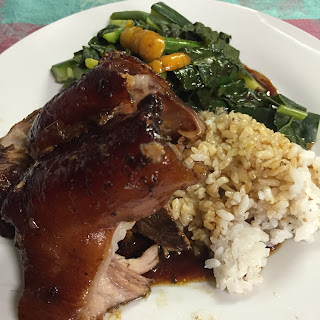 This was simply DELICIOUS!!!
Posted by Lucy House at 12:47 PM