A busy month for all of us at Dawson Valley Free Range, as per usual! We have had a small taste of Autumn - cool nights and the sting has gone out of the days, although they still get pretty warm. As I write this post, it's cool and a little drizzly outside. Hopefully we may get a shower to settle the dust.

We had an interesting morning last week when ABC Capricornia came out to interview us for a segment to be aired on Landline. The main purpose was to discuss our thoughts on using backpackers to help us and their (voluntary) time being allowed to be put towards their second year visa application. Backpackers visit Australia on a working holiday visa and if they work on a farm for 88 days, they can then apply to stay for a second year in Australia. There were quite a few cases of mistreatment of foreign workers - usually by unscrupulous contractors in the fruit and vegetable picking industry. Because of this, farms like ours would attract people - we wouldn't pay full (or any, in our case) wages, but the backpackers would in most cases have an enjoyable cultural exchange. We made many long lasting friendships - which happens when you live in close proximity for 3 months.

This all came to an abrupt end in 2015. The rules changed and the workers had to show a payslip or group certificate proving that they had been paid a full wage for work preformed. We still get backpacker helpers, but they don't stay as long - two to three weeks is the norm these days.

There's a couple of reasons why we would like to see the volunteer labour still being acceptable to count towards the second year visa. Also I think it can be controlled and workers not getting abused. My thoughts below:

Anyway..... the filming was an interesting experience and several hours of filming will result in about 10 minutes on TV. I will let everyone know when it's going to be aired, but it will be a few months.

Some photos of the filming below. 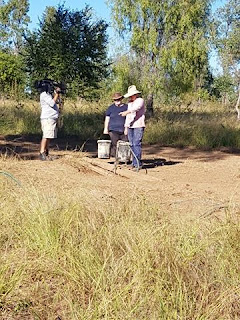 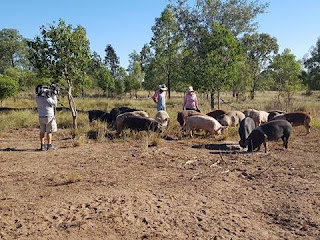 Lucy and Mick checking over the gilts as they feed 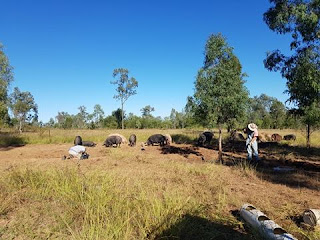 Farmer Mick fixing up the wallow for the sows 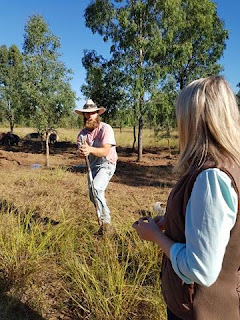 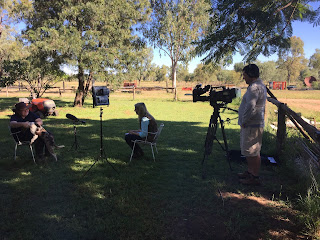 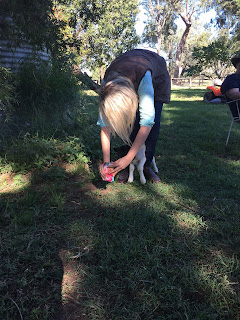 Amy trying to take a selfie with Misty the pet lamb

Markets are this coming weekend in Yeppoon on Saturday and Rockhampton on Sunday. If you want me to put anything aside, please email me.

We have had some lovely rain in the last little while and because it has stayed warm, the grass has continued to grow. We are expecting more rain this coming weekend, and I think it'll come in cold after that. I hope so, I'm looking forward to lighting the fire and just enjoying being cool rather than hot!

The way we farm is called Regenerative Farming. We believe that this term is better than being called sustainable farming. We want to leave the land in a better state than how we found it. In 2003 we put cells in (small paddocks) and starting moving our cattle around the paddocks, resting them for a couple of months to enable the grass to recover fully before grazing again. This has so many benefits, but the two major benefits are that our cattle are eating the grass at it's most nutritious AND we are doing our bit towards an environmental improvement through increasing soil carbon sequestration, encouraging plant diversity and improving the ecosystem for our native animals. I like to think of it as the ultimate ethical farming - looking after the environment as well as the welfare of animals. 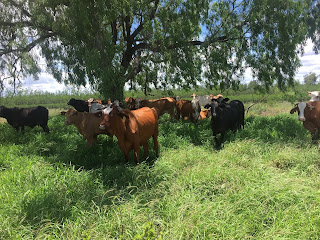 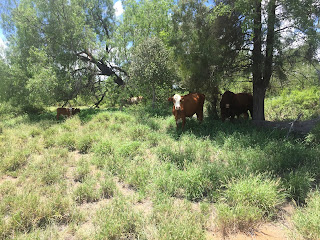 In recent years we have focussed  on our core business of free range pigs and have allowed our children to take over the cattle side of the business. They own the cattle and sell them to us for the markets. They will be branding their beef - Bush Friendly Beef. Our property is certified organic and the cattle, goats and sheep are managed organically. The pigs are free range and it has been a challenge to manage their grazing as it's not as easy as the cattle.  Cattle are kept in one big mob, with different aged animals, a mix of steers and heifers, cows and calves. Pigs on the other hand are kept in mobs of 30-50 for the weavers to growers. The sows are usually in mob sizes of 12 to 20 until they farrow, when they are separated from the mob to have their babies, and then we need to keep the boars in separate paddocks where we take the sows when they need to have a visit! It takes quite a bit of planning and labour to keep everything operating the way it needs to be. 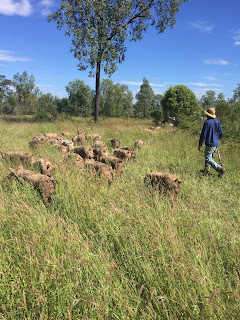 This is why free range pork is so much more expensive than commercial pork. It's also why it tastes so much better! So not only are you supporting a local farmer by purchasing our products, but you are helping to improve the environment for all Australians, you are improving your health by eating products that are more nutrient dense and because they are ethically farmed, you are doing your bit to ensure animals are better cared for.  A win/win for everyone!

This post is also a reminder that we have markets in Yeppoon and Rockhampton this weekend coming - 20/21 May. We will also deliver to Gladstone on Saturday afternoon. Please email me if you would like more information or would like me to put something aside for you to collect.