Our nitrate free ham and bacon is quite popular. I think I've mentioned before that I personally don't like the nitrate free ham as much as the conventional ham. (I like the bacon). We went into the nitrate free stuff, because I was convinced that nitrates/nitrites are bad for you. You know, cancer causing and all the rest. I also think that our grandparents grew up on corn beef, so it can't be that bad!

Also, because I like my ham and corned beef and I really want to have another go at air drying meat this winter (I made duck breast prosciutto last year) I thought that I would investigate a bit more about the nitrate debate. I'm also reading Art of Fermentation at the moment and Sandor Katz said that he was more concerned about botulism than nitrates.....so my research has confirmed my earlier thoughts, that maybe the nitrates aren't so bad any way. I've included some links
here and here and here .

These are all US sites, however I would assume that our regulations in Australia would be similar. I do think though that caution needs to be in place with eating alot of preserved meats, mainly due to the high fat and salt content in some of them - eg salamis and hot dogs. So sticking to Dawson Valley Free Range ham and bacon is the best idea. Seriuosly though, the ethics of the product do come into it - how the meat is raised and processed.

This winter I'll be trying some air dried pork jowl I think...... 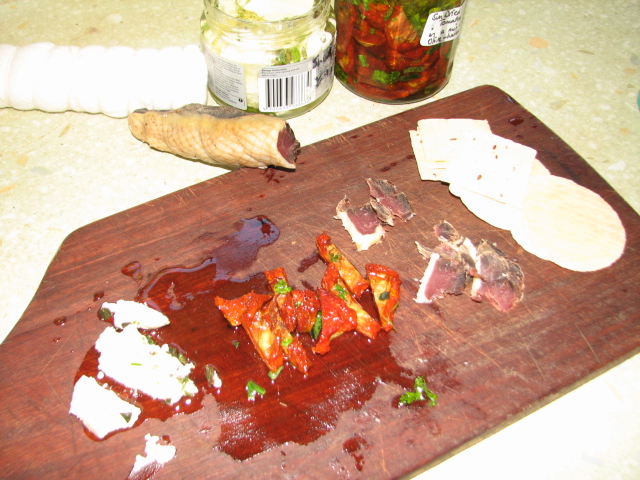 My duck breast prosciutto - which I didn't use nitrates in and then worried I was going to poison myself - it was good though - had enough salt to kill anything though!

If you've found different information, please leave a comment.
Posted by Lucy House at 7:53 AM