We have recently had some very hot weather! I think most of Queensland had a heat wave and now Southern Australia is getting it - I just hope it stays down there. It's cooler now, but still pretty warm, so I thought I'd talk a little about our pigs and how they (or more correctly we) manage it. Pigs can't control their temperature - they don't sweat. So to cool their body temperature, they need water. Some people use sprinklers, but we use wallows. The muddier the wallow the better. The pig lies and rolls in the mud, which cools them down, but a added advantage is that it supplies ongoing sun protection as well as insect protection. Sprinklers aren't any good to us, as they keep the pig clean and then they get sunburnt. 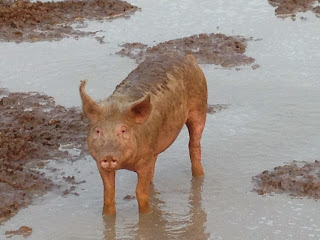 Our day starts fairly early, as I get up and milk the cows first thing. Then we start the feeding. This is mostly done by hand, with only one lot of pigs on self feeders. We have several mobs of pigs. We have three boars, so we have three separate breeder mobs - there's about 50 sows altogether. We just about always have some weaners. These are the piglets taken off mum and kept separate for about 2 weeks. They then get moved to our Slips paddock. We call them slips because they aren't weaners and they aren't really growers, they just slip somewhere in between the two! We then have two grower mobs and two finisher mobs. We have two of each of these, as we separate our gilts (girls) from the boars (boys). A gilt is a female that has yet to have piglets. Once they have piglets they are called a sow. We also have several smaller paddocks with wet sows - wet meaning that they still have piglets on them.

We hand feed for a few reasons. One is that the pigs tend to eat too much on the self feeders and the other reason is the cost of the feeders to begin with! While we are feeding them, we top up their wallows and make sure their troughs are all working.

Then we have smoko!

Then we go out and check the wallows again - turning off any taps that we've left running and generally checking everything again. We can't afford to miss a pig, as they really do get stressed very quickly if they don't have a wallow. We do manage to get a few other jobs done before lunch, and that's usually when Lucy gets some bookwork done. Kim has to stay outside in the heat! Then it's lunch time and we then have a break - Siesta time! I like that the best!

Then mid afternoon it's back outside again - to check wallows and waters and get a few more farm jobs done before knocking off about 6.30/7pm. I'm looking forward to winter, the days are much shorter!!!

The hot weather means more work, however the recent rain did give us some respite. (a) it has been cooler, and (b) while it was raining and for a couple of days afterwards, we didn't have to worry about water. It's Murphy's Law that when it's hot and dry, you always have water and pump problems, so we are constantly starting pumps and finding troughs that are faulty and drain all the water and all sorts of things like that. 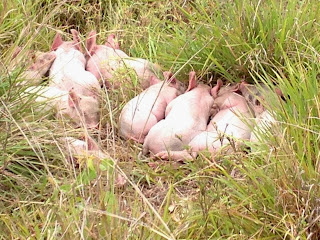