A reminder to all that we have the markets in Yeppoon and Rockhampton this coming weekend - 4th and 5th March respectively. 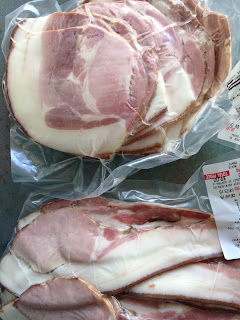 We will have our incredibly tasty pastured pork and our tender and delicious grassfed/finished beef. We won't have goat for this weekend, however we will have it next market, which will be on the 18th and 19th of March.

We had quite a lot of interest in the pork packs and I'll post some photos over the weekend on Facebook to give an example of what you will get in your pack. However, if you would like to order one for the next market, I will need to know by SUNDAY night. Please talk to me about it at the markets this weekend!!! It's very good value at $13/kg for the pack and this price will hold for any orders RECEIVED before the end of March (first weekend in April delivery).

For all those people that ordered a pack, please collect from the market closest to you!

Our butcher informs me that we have some salami in his freezer, so we will bring them along this weekend. For all purchases over $50 you will receive a free salami. One of our customers (a chef with a German wife) says that its some of the nicest salami he's had in Australia. I think it's nicer now than it was before it was frozen! It will also be on sale separately.

Some other exciting news!!!!! Dingles Cafe and Bar will be featuring our pork, bacon and sausages on their menu when they open in the next couple of weeks. Have you heard about them? They'll be in the old Restoration House building at 116 William Street. Check them out on facebook.

Something new we are going to trial this month is Sow Meat. We will have a selection of fresh and smoked products utilising sows. The sow this month is a younger one that had one litter and is probably about 3 years old. We will be selling this considerably cheaper than our usual pork so who's game to give it a go???

Hope to see you this weekend!